Ode to Somebody Else

The country’s most talked about reality show Pinoy Big Brother (PBB) has produced numerous household names throughout its 6-year run. Some of the show’s alumni are the biggest names in the industry today.

Mass appeal and charisma largely influence one’s popularity but PBB seasons have proven that success as a housemate is also largely attributed to kilig factor. Kim Chiu and Melai Cantiveros, two of the show’s Big Winners, have gained overwhelming fame and reached celebrity status when loveteams were formed with their fellow housemates. The Big Winners belong to two of the hottest loveteams the Philippine audience has ever embraced – KIMERALD and MELASON. It is interesting to note that Kim and Melai’s loveteam partners Gerald Anderson and Jason Francisco were also part of the Big Four of their respective editions. While Kim and Gerald have recently parted ways in terms of showbiz projects (the two have yet to directly admit the real-life breakup), Melai and Jason still maintain the on and off screen tandem.
The noticeable trend continues in the current (and touted as the grandest) season of PBB – Pinoy Big Brother Unlimited. Barely a month on air, the show’s fan pages on Facebook, support groups on Twitter, and threads on forums have been sprouting all over expressing support for this season’s housemates. This only shows that even after eight editions, PBB still knows how to feed our usi trait. The usis (and hopeless romantics) in us are all the more triggered when the traditional loveteams are brewing.
Here’s a random list of this season’s loveteams-in-the-making:
Mark ♥ Kim = MARKIM
This real-life couple had to face the week-long task of keeping their relationship a secret from the rest of the housemates. The pair may have received automatic nomination when fellow housemates found out about the truth before the task was over but the incident also gave them the license to openly show their affection for each other.
Seiichi ♥ Pamu = SEIMU
Both known for being funny and animated, Seiichi and Pamu gained a following when they showed closeness and comfort with each other inside the industrial house. It can be recalled that the two made a transfer from the looban. Seiichi and Pamu exchanged language lessons on Japanese and Filipino.
Seiichi ♥ Jaz = SEIJAZ
Big Brother started giving the two tasks when Seiichi expressed his crush on Jaz. Seiichi told Big Brother that he finds the FHM girl sexy. He said in a funny Japanese accent, “Maganda ang hubog ng katawan.”

Seiichi ♥ Tin = SEITIN
Inside the newest house, it certainly looks like Seiichi found another “chika-chika” partner in Tin. In their many random conversations, Seiichi and Tin have an undeniable connection. This caught the attention of keen livestream observers and a new loveteam is instantly formed – Seitin.
Kevin ♥ Tin = KEVTIN
Kevin and Tin as a loveteam is now a far-fetched idea unless a sudden switching of housemates will take place. When they were still together inside the looban, Tin jokingly hinted on having a crush on Kevin. Both good-looking and of the same age bracket, Kevin and Tin had an instant following. Funny how several edited photos of the two have been popping up online.
Slater ♥ Tin = SLATIN
This pairing has a surprisingly large online following and a lot come from the 24/7 livestream viewers. Twitter updates and forum threads reveal that the two are showing chemistry inside the house. Both are claimed to have expressed admiration for each other in their conversations with other housemates. They are also constantly hanging out with the same group. There is an ongoing online clamor for the so-called Slatin moments to be covered on Primetime Bida’s UnliNIGHT.
Carlo ♥ Tin = CARLTIN
24/7 livestream viewers noticed that reserve-turned-official housemate Carlo and Tin are potential loveteam partners. They have been seen enjoying random conversations and bonding sessions with Slater and Divine.
Biggel ♥ Tin = BIGGETIN
Biggel confessed he has a crush on Tin when the group faced the risk of losing some of their housemates. Although Tin had been very honest that she only sees Biggel as a friend and little brother, fans multiplied as they see the two maintain a tight bond. The tandem has earned a lot of primetime exposure in the past weeks which includes Biggel’s special task – a one-on-one basketball game with Tin’s father and PBA legend Alvin Patrimonio.
Slater ♥ Divine = SLAVINE
It was no secret from the very start that Divine is openly gay (and has a girlfriend!) but this reality does not stop numerous fans from linking her to fellow Cebuano housemate Slater. A photo from a fan page reveals that the two have previously met through a common friend. Fans get giddy whenever they see how Slater and Divine are getting along really well inside the house. To add to that, Divine told Slater in a livestream conversation, “If I were straight, I probably would like you.”
Will being part of a loveteam take them to the Big Night or cut their journeys short inside the house? We still have a few months (and several evictions) before we find out.  Anything can happen. We can only savor the kilig moments while they last and watch out for the twists that may make them switch partners.
As most of us know, aside from presenting a growing list of loveteams, PBB also promises unlimited twists throughout the whole season. Just a week after the grand launch last October 29, fans have been surprised that two sets of housemates are given separate exposures this season via their UnliDAY and UnliNIGHT scheme. PBB UnliDAY on Kapamilya Gold is hosted by Bianca Gonzalez while UnliNIGHT on Primetime Bida is handled by Toni Gonzaga. UnliUpdates are regularly provided by the show’s new host Robi Domingo.
Share your thoughts below: 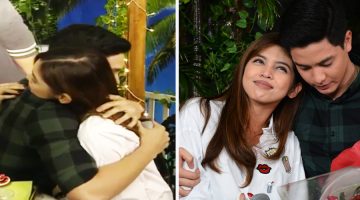 For Reel or For Real? Maine Mendoza Says ‘Yes’ to Alden Richards; They Say ‘I Love You’ to Each Other