Why Alma Moreno Made Us Cringe

Mother Teresa to be Canonized as a Saint Today

JaDine, One Republic, and Other Icons at the MTV Music Evolution Manila 2016

If there’s one brand I sincerely trust and highly recommend to friends, it’s Beautéderm. (The cut-up pieces of the best-selling Papaine soap I have in my bathroom are proof. I gave some away for friends with acne-prone skin to try!)From its simple papaya and orange soap to its “Tita-must-have” soothing oil, feminine wash, papaya ointment, and soy candles, everything is rave-worthy. You can just imagine how thrilled I am to know that the business is growing and my go-to products are now easier to access and will likely be there for long.

It’s a blessing that BEAUTéDERM Corporation continues its commitment to break new grounds, change lives, and beautéfy countless people with the grand opening of its flagship store located at the second level of Marquee Mall in Angeles, Pampanga last September 18.

WATCH the ribbon-cutting and how fans flocked the flagship store opening:

Rhea Anicoche-Tan, Beautéderm Corporation’s President and CEO along with Kapuso Primetime Queen Marian Rivera-Dantes, who was launched last year as the face of Beautéderm Home, were present at the blessing of their flagship store attended by loyal customers of the brand, resellers, distributors, and members of the mainstream press as well as the fans of Marian.

WATCH the meet-and-greet session at the entertainment area:

In 2009, Rhea, who was then employed as Vice-President for marketing in a mammoth appliance company, toyed with a creative business idea with a Php3,000.00 start-up capital. The big idea that was borne out of her heart and mind aimed to embody her guiding philosophy in life that beauty begins by taking care of one’s self, and by doing so a person will be more healthy and shall exude beauty not only in the outside but in the inside as well.

Thus the birth of Beautéderm Corporation. With Rhea’s desire and idea to beautéfy the country one person at a time through a product that boasts of the highest quality that delivers the fastest, most effective, and most sustainable results, coupled with her unwavering commitment to hard-work and perseverance, and her unconquerable faith, what started out as a simple online distribution business gradually metamorphosed into arguably one of the most successful businesses that originated from the thriving city of Angeles, Pampanga.

Beautéderm prioritizes safety and effectiveness above all with its FDA Notified products, which only uses plant-based ingredients that are perfectly synergized to deliver its promise of not only physical beauty to each and every one of its loyal users but also a more flourishing life to its resellers and distributors.

Beautéderm is now a consistent Superbrands awardee. Some of the flagship brands under Beautéderm include the famed Beautéderm Skin Care Sets for both the face and body; and Beautéderm’s perfume collection which includes Origin Senses perfumes for men among many others – all of which are top-selling products in the market today.

Currently, Beautéderm has over a thousand resellers and distributors both locally and internationally as it ships products every day both here and abroad with its strong partnership with the best shipping company in the country. The brand also has physical stores throughout the country and one in Singapore; and the company has almost 40 brand ambassadors which include actors and actresses, TV personalities, singers, beauty queens, politicians, comedians, and social media influencers.

Marian is con-currently endorsing Reverie by Beautéderm Home – an exquisite line of home scents – which include soy candles, room sprays, and linen sprays – all created by Beautéderm in collaboration with Marian to exhilarate and rejuvenate everyone at the comfort of their homes.

In the course of time, both Rhea and Marian have developed a very close kinship that transcends their partnership.

“Aside from the fact that Marian is truly one of our top celebrity endorsers and that her association with the brand really helped in boosting the sales of our products, she is also a very, very dear friend,” says Rhea. “Marian is such a joy to work with and she is also the sweetest and most caring friend anyone could ever hope for. I am proud and grateful to have her onboard the Beautéderm team.”

Marian on the other hand is delighted to be part of the growing family of Beautéderm. “I feel blessed and honored for the trust that Rei has given me to represent Beautéderm Home,” says Marian. “My partnership with Beautéderm is really one of the best I’ve ever had and it warms my heart because Rei and I are like sisters. The entire Beautéderm staff is like family to me now.”

WATCH the INTERVIEW with Marian. Find out what her go-to Beautéderm products are and get updates on her children Zia and Ziggy. She also revealed her mom is opening their own Beautéderm store.

“This is truly a dream come true,” says Rhea. “This flagship store is a testament of what hard work, dedication, and steadfast prayers can do.” 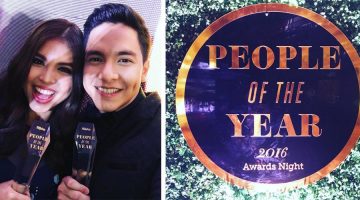 Alden and Maine Receive Their People of the Year 2016 Awards